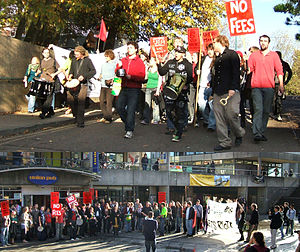 Well, there is no more speculation, the tuition fees are going to rise to £6,000 per year with an upper limit of £9,000 per year. The government has pulled their funding of higher education and the universities are being given the power to take the shortfall from the students themselves.

I have probably blogged this to death; will this mean a two tier higher education system based on wealth? Will fewer students apply for university on the basis of cost? Will this mean the country’s knowledge based economy suffers? Who knows, but I think it is safe to say nothing good will come of this, except perhaps that the tax payer won’t be paying as much into higher education, but that is a double-edged sword as with all these cuts.

Higher education is going backwards. If you’d like to do something about this, the NUS and NCU demonstration on Wednesday 10th November 2010 is a great place to start!