The demonstration in London, on 10th November 2010, by students in England protesting against the government’s proposal to raise tuition fees to up to £9,000, ended in violence and anarchy. 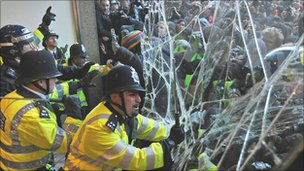 Some will say, that it is about time students in this country stood up for something they believe in, that today’s self-serving and image obsessed youth lack the conviction and drive of previous generations of students. Others will say, that it’s a sad fact that this country’s students can only be mobilised to demonstrate against injustice when that injustice relates directly to them and their pockets.

Whatever your view, the demonstration was a success from the point of view that a huge number of students turned up. I think one of the greatest weapons in this kind of protest is sheer numbers. Nothing sends a clearer message to those in power, that a group of people are peeved, than a huge protest. The message has been sent, that the youth of this country are not happy!

The violent actions of the few should not detract from the overall message of this demonstration. It is just a shame that, as is always the case when the violent minority show up, the overall message, and entire point of the protest, is over-shadowed by the violence. If only the people that think violence is acceptable would realise this!

The protest was a roaring success, ignore the violent minority. It is a clear sign to the government that you cannot price people out of our education system without backlash from the people.